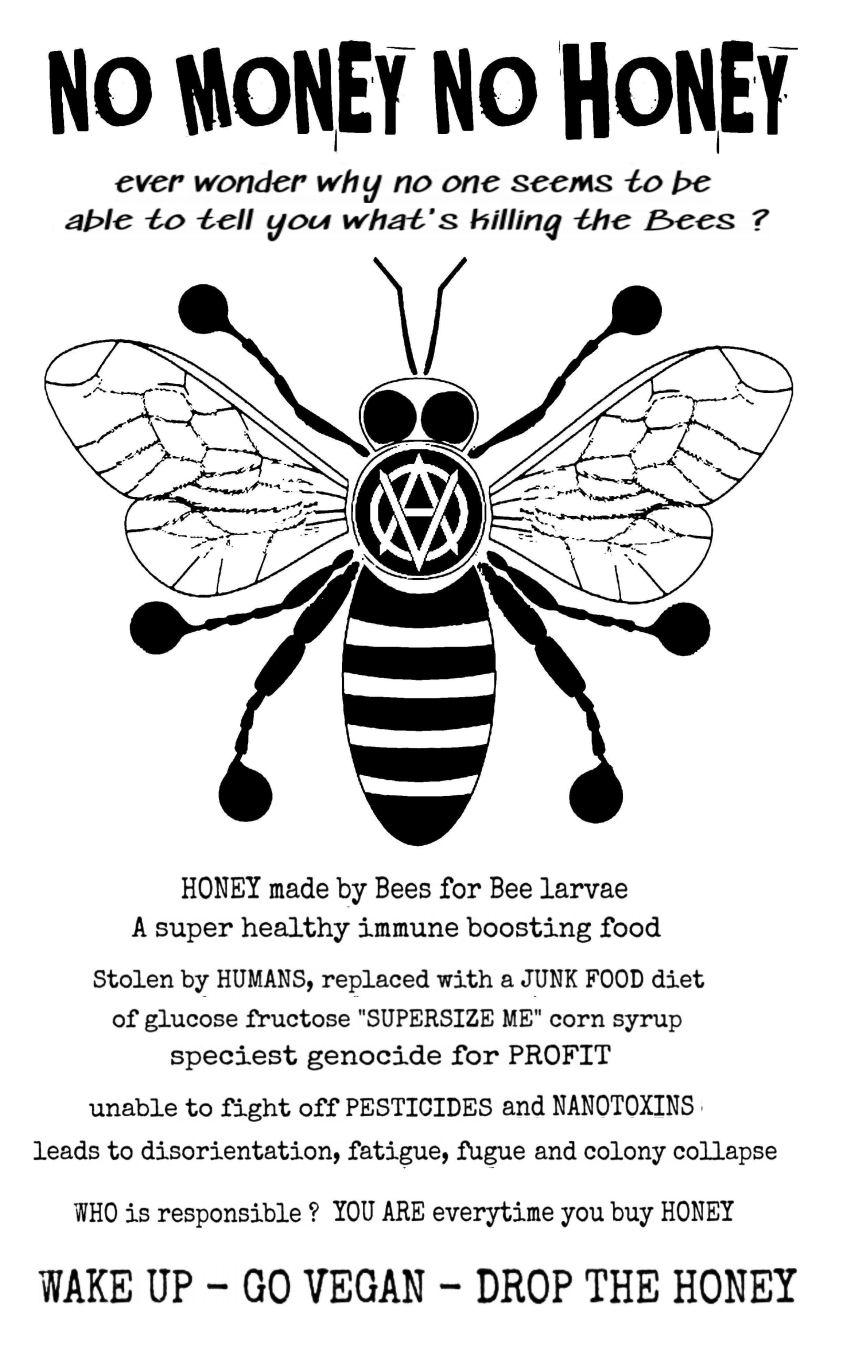 “As a child there were wild hives in the forest, they were started mostly with drilled long bore holes in cut off blocks tied nailed to the trees, sometimes a hollowed branches bundle with indents around  half a foot long for the bees to lay larvae on,….. the wild hives the forest..those things, those days are gone…” 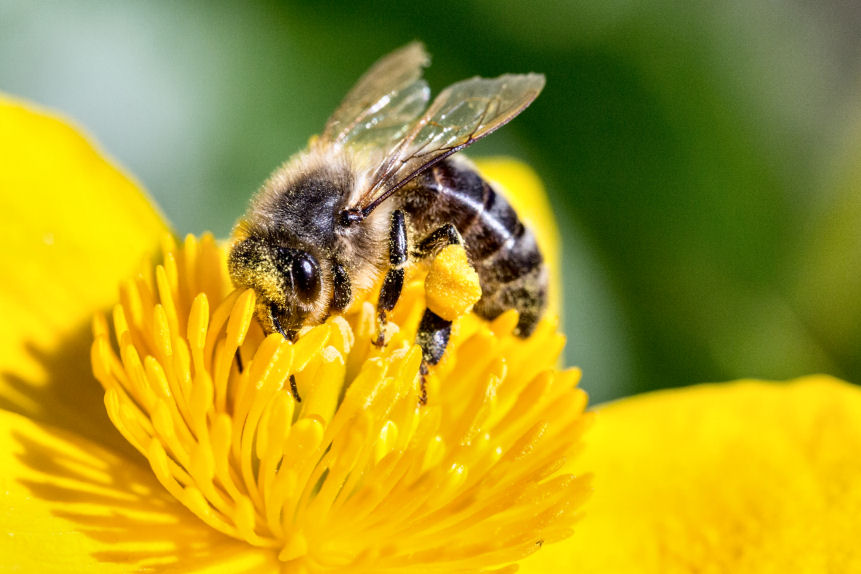 “After a while you would notice the start of hives around the boxes and bundles, over a year or two they would swell to full active vibrant communities, The honey overs used to drip from the bottoms, down the tree trunks
Kids would run their fingers up the trunks, wildlife would feed on the overs on the ground and low trunks, the fruit trees around the hives would start fruiting, there would be an abundance of wild flowers, colourful heads and long breezy stems. Later i realised that conservationists had seeded these. The bees would pollinate and be undisturbed, this was there gift, pollination……Nothing else was taken, ever..”

Since my last trip back to canada i can say i have never seen free forest undisturbed hives anywhere in the eu or us. All i see is the commercial operation and its the same everywhere. The absolute enslavement of an entire race !

Mainstream Media has rolled out a string of “investigations” into whats killing the bees, ROTTEN on netflix reported 37 million bee deaths a year in the continental USA . If that happened to cows or people there would be outcry.

The Honey theft –  Does an Olympian train on McDonalds ? Does a RaceHorse run on Bacon and Eggs ? we all know that diet is 80% of  peak performance, every Bee in it’s natural habitat is an Olympian, thee are no couch potato bees or shift workers skipping off on tea breaks and shirking, they are Spartans they are tireless and their diet has been perfected of a millenia to deliver.

The pesticides and pollution – Healthy body / Healthy Mind ? the synthetic sugar addled unfit struggling worker bee just can’t operate efficiently or in increasing numbers even find the way home in a fog of pesticides and pollution. the biggest consumer crop of pesticides is grain and protein crop for animal feeds,. to cut to the chase , if you are eating meat as well as Honey, you are double daming the Bees with your eating preferences.

The situation we have since 1972 (the start of the destruction of the Honey Bee with the global roll out of Glucose Fructose Corn Syrup) is likable to a  a big brother type sitcom (the hive) where our fitness guru’s are watched and followed going shopping each day with their hard earned cash and opening their fridge in the morning and finding it all stolen ,empty or stacked full of junk food , look around , some furniture is out of place, one or two house members are concussed (smoked, neuro nano toxins) not sure if they will pull through, a window us smashed (removal damage)

What is nasty, insidious and speciest is the act of theft of honey. Honey has been stolen for over 4000 year by humans, obsessed with consuming its purported health busting properties. Yet in the last 300 years, the hive industry has become the norm and taking the overs has become wide scale removing of 2/3 of the honey hive to fund profit.

The survival of one one the oldest most fascinating species on earth starts to diminish as their health is affected by a sustained replacement diet of synthetic sugar water as Honey is stolen for Human consumption. 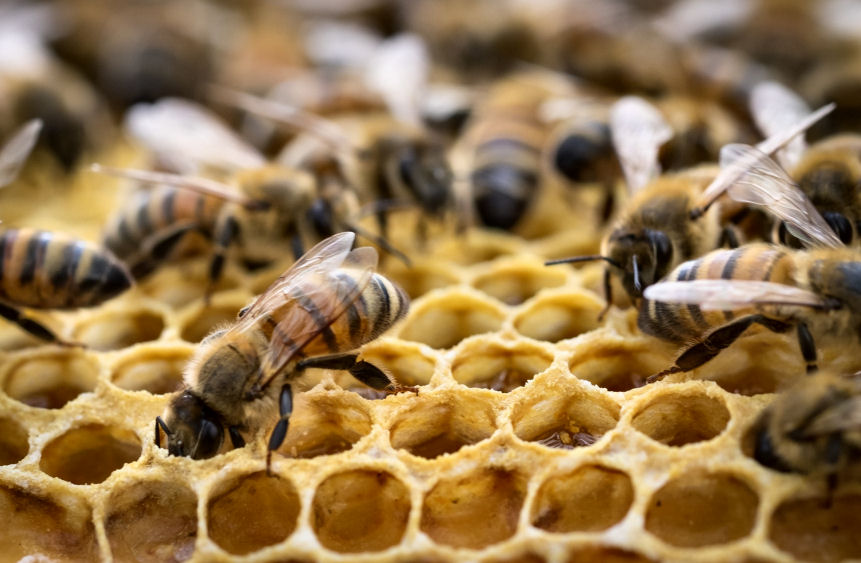 “We steal its daylight robbery for sure, does it hurt them, not immediately but by the time winters through you see them dead in the thousands. But that’s the business we are in” 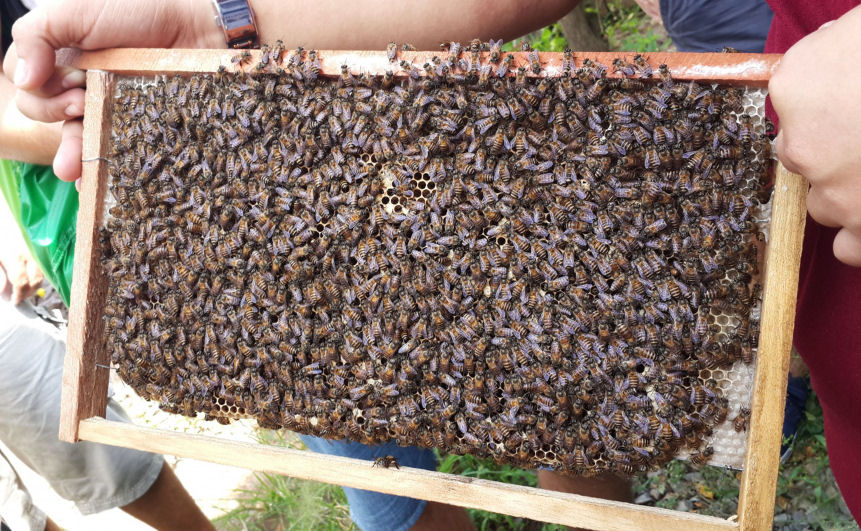 bees pollinate crops for everyone but taking their honey and replacing it with synthetic sugar syrups weakens the immune system and they get wiped out by pesticides.

The bees also don’t wax off the honeycombs if sugar syrups because they don’t like it, the honey is their balanced nutritional diet they work hard to make it, humans steal it with a wide range of lies about profits and bee rent and replace it with junk food. Ever see “SUPERSIZEME” how sick the guy gets ?

As for the so called eco bee hives, they also take the wax for beeswax and use it in lip balms. Open a factory hive and you find 1/3 of commercial hives have sick bees. Honey is only one side of the problem, poor health also means a poor immune system and that is the deal closer for the Honey Bee in our modern pesticide filled world.

without a strong die and the additional work of have to replace stolen supplies the ever enslaved and overworked Bee also has to fight off toxins pollution and pesticides. It is blatantly obvious and common knowledge that a healthy body can resist infection fatigue and disease better than an unhealthy one. Humanity though the Honey Theft has already damaged the Bees health, next humans lay the gauntlet of poisoned air for the bee to struggle through.

So called eco bee keeping companies report to “save the bees” by planting an additional 5,000 flowers a hive and advertising this is ethical, let’s do the maths though, 5000 flowers well that’s enough pollen for 100 bees who each produce 1/6 of a teaspoon.. how much honey do you spread on your bread ? how many lifetimes work stolen ?.

The reality is that 50’000 flowers should be planted per hive minimum.  Even when the flowers are planted, the Honey those bees make is eco or commercial, stolen. 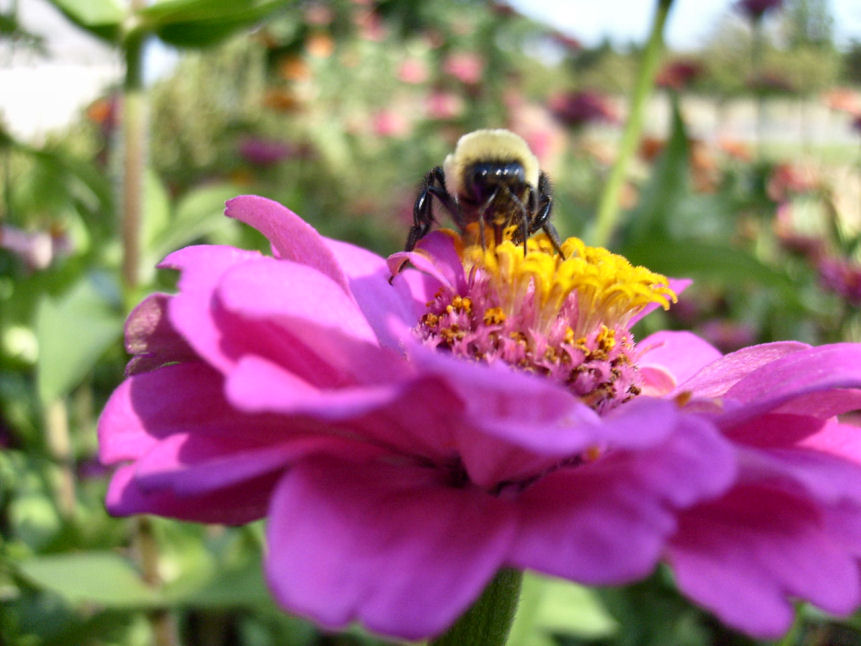 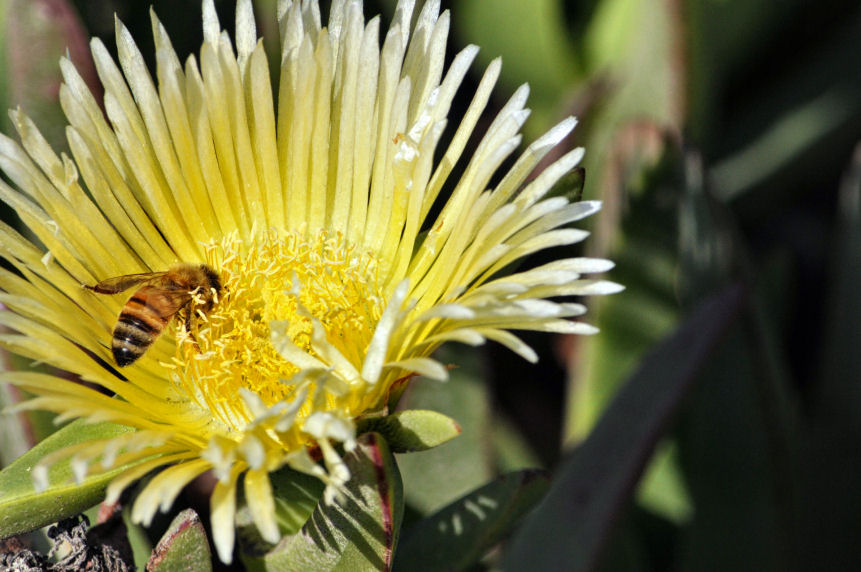 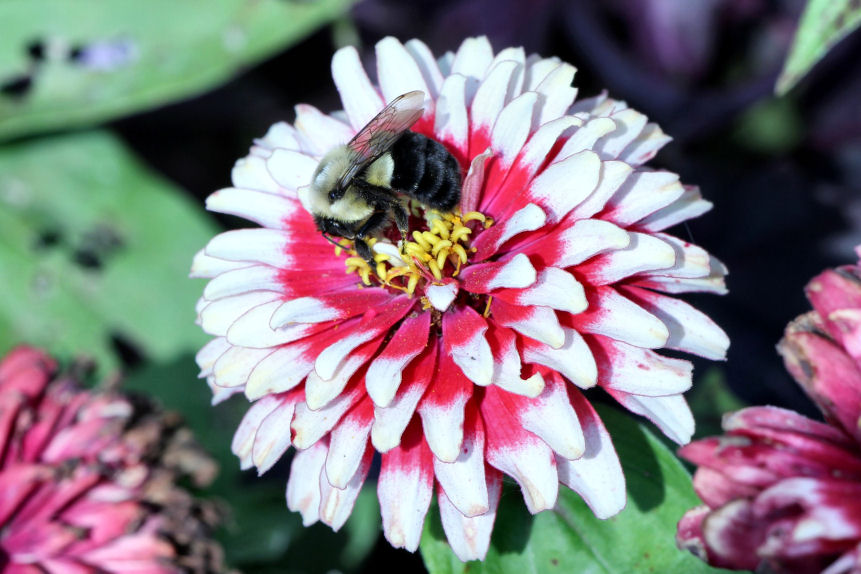 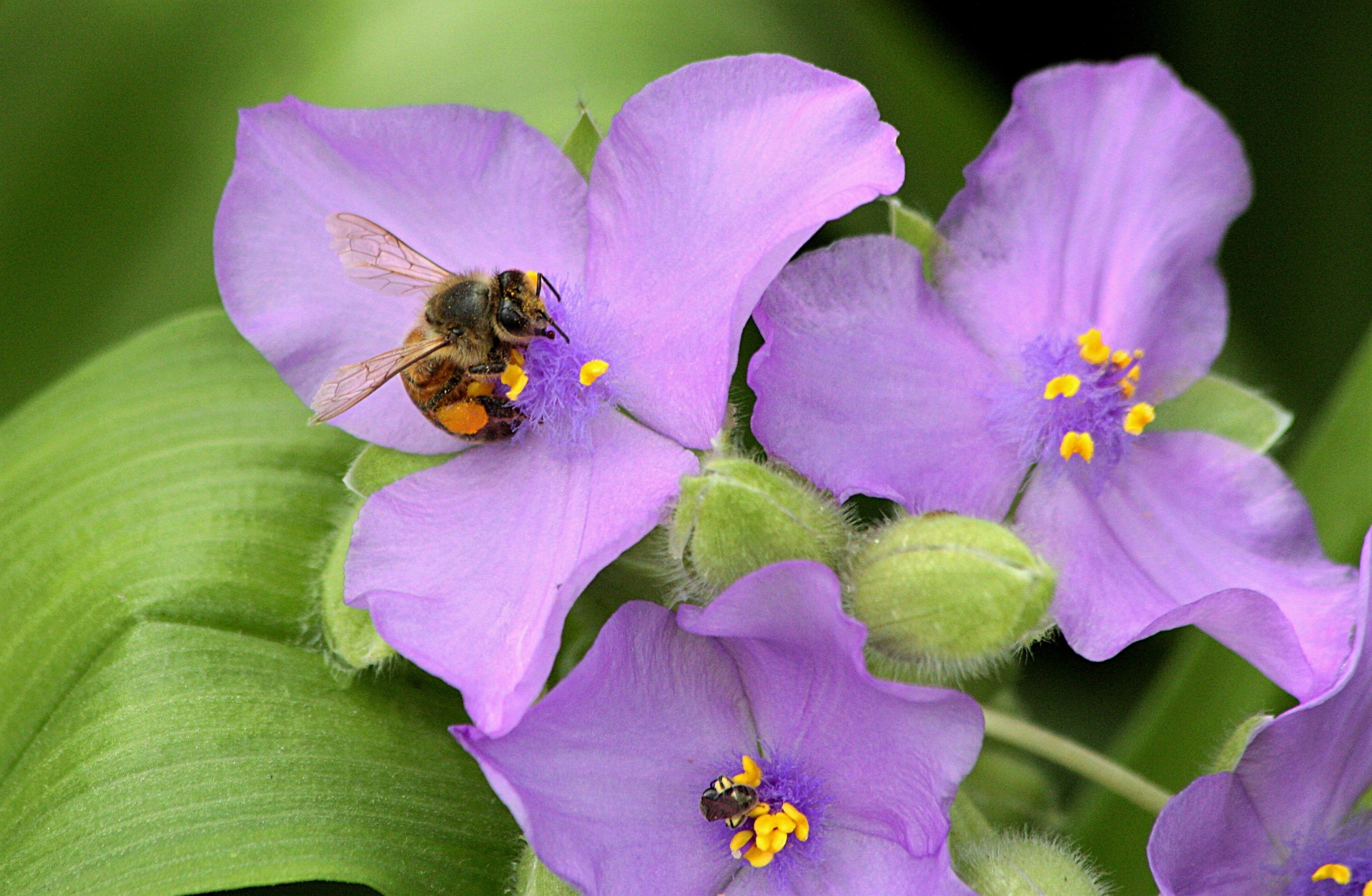 In short the ECO trend sold under so called Health outfits like Holland and Barrett (such as the Manuka Honey gold mine)  say they are ethical for the bees, but we already know from the numbers and the theft of the end product that it doesn’t ring true, no amount of Media Marketing can normalise theft and slavery in the Honey trade.

Open debate between Bee Keepers and Honey producers and the Vegan community become heated , Bee Keepers wave off criticism stating people are not educated enough to know whats really going on. This post clarifies the “education” and exposes the lies.  The truth is that they are profiteering off bees and the bees will suffer and die as a result of Human intervention, not be saved by it.

There’s lots of ways to save bees, wild hives and the planting of bee food flowers are the good steps, the elephant in the room and the frankly obvious is to stop consuming their honey.

Vegan activists have turned round hives that are dying from sugar syrup replacement by actually buying jars if honey and literally putting it back into hives.

Those who set up wild hives on their land and allow the natural development of Honey Bees unmolested will see their flowers and fruits do better year in year.

Is there any instance where consuming Honey can be seen as Ethical ?

It will never be Vegan as its an animal Product, Ethical possibly only in one instance  – The only collection of honey that could ever be called ethical is on over spill where the honey drips out of a wild hive to the ground, though what people take from this means less for wildlife and this again needs to be put into perspective, globalised society offers Humans more access to sugar replacements and alternatives that any other species. A human an simply go to aisle 22 instead of aisle 23 and buy ” agave nectar” instead of Honey at the same bottle price. A racoon looking for something sweet on the forest floor cannot…

Where do I get a HONEY alternative that rocks ? : https://www.groovyfood.co.uk/products/light-amber-mild-agave-nectar

The standard theft rate from a commercial hive when all the rows are full, bee producers say a minimum of 3 rows a hive to last winter  should keep the hive alive yet i this was the case then we would not see death totals in the 40 millions every year and widespread colony collapse.

The minimum for a commercial hive is 5 rows. The honey producers take 60 percent , they leave 3 rows and replace the stolen rows of Honey with synthetic sugars. As previously put – Its theft , dailybreakin’s, ransacking and theft.

No Vegan will support the use of Honey, will not consume it or stock it. We have not seen one ethical Honey operation globally ever. Wild hives we see, but only where people are land conservationists or have “forgotten 2 about them, we would like to encourage people to set up wild hives. I foyu want to get started on wild hive program in box us and we will send you a how to guide to getting started,

If you really want honey for nothing and have inherited an active former commercial  hive  then do it ONLY with an overspill tray under the hive.

– Don’t take the rows, it stresses then and makes them work harder

pollination of our crops is being effected by the honey stealing and promoting community And when that species dies we all die.

No Vegan ever makes “Money” from getting you to stop eating Honey, Every Honey producer makes money from you when YOU ignore the truth , YOUR responsibility for our collective future and believe the marketing speech.

Its a heath thing ? You want to be healthy ?

Get on a Raw Vegan Diet and buy the book HOW NOT TO DIE , it’s really that simple. 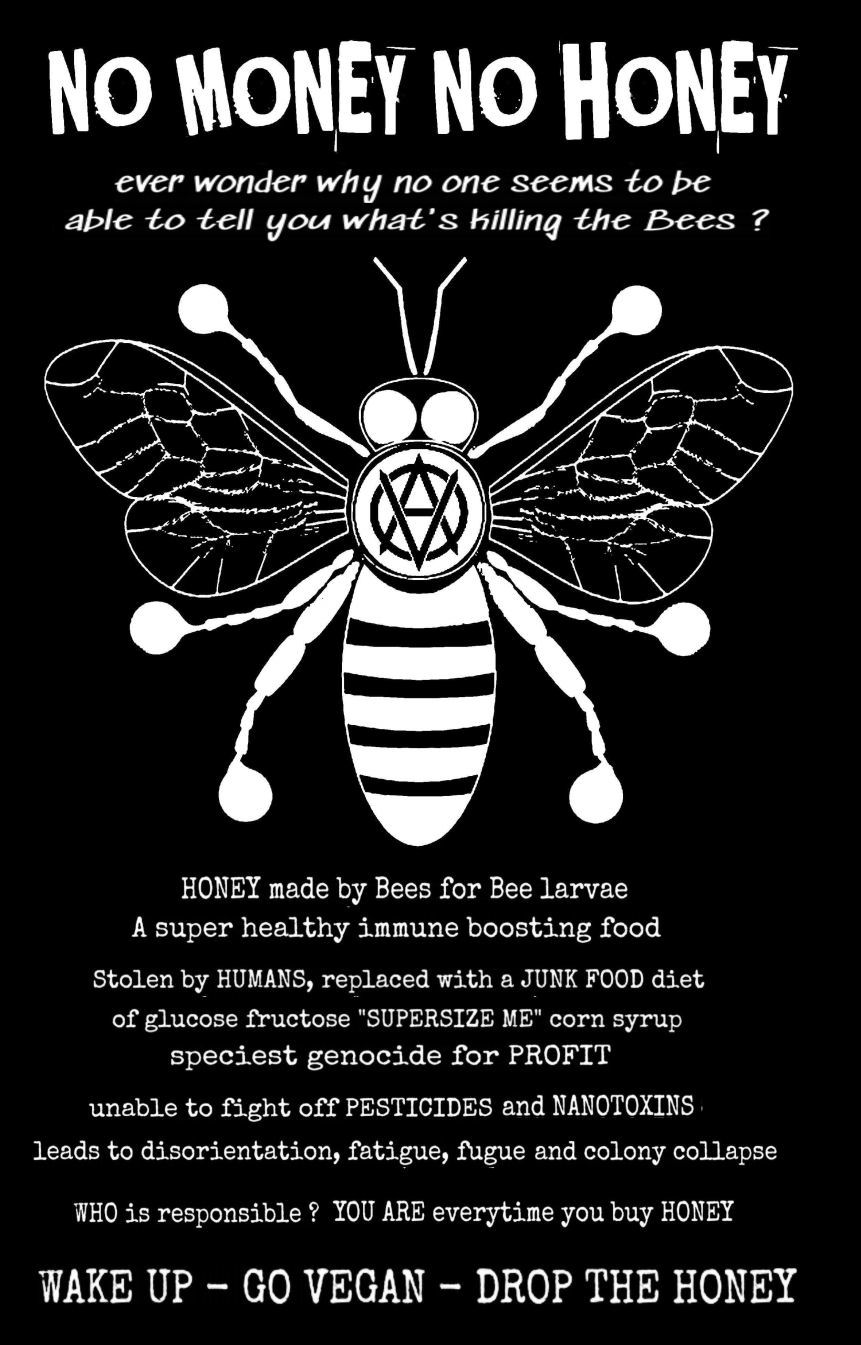