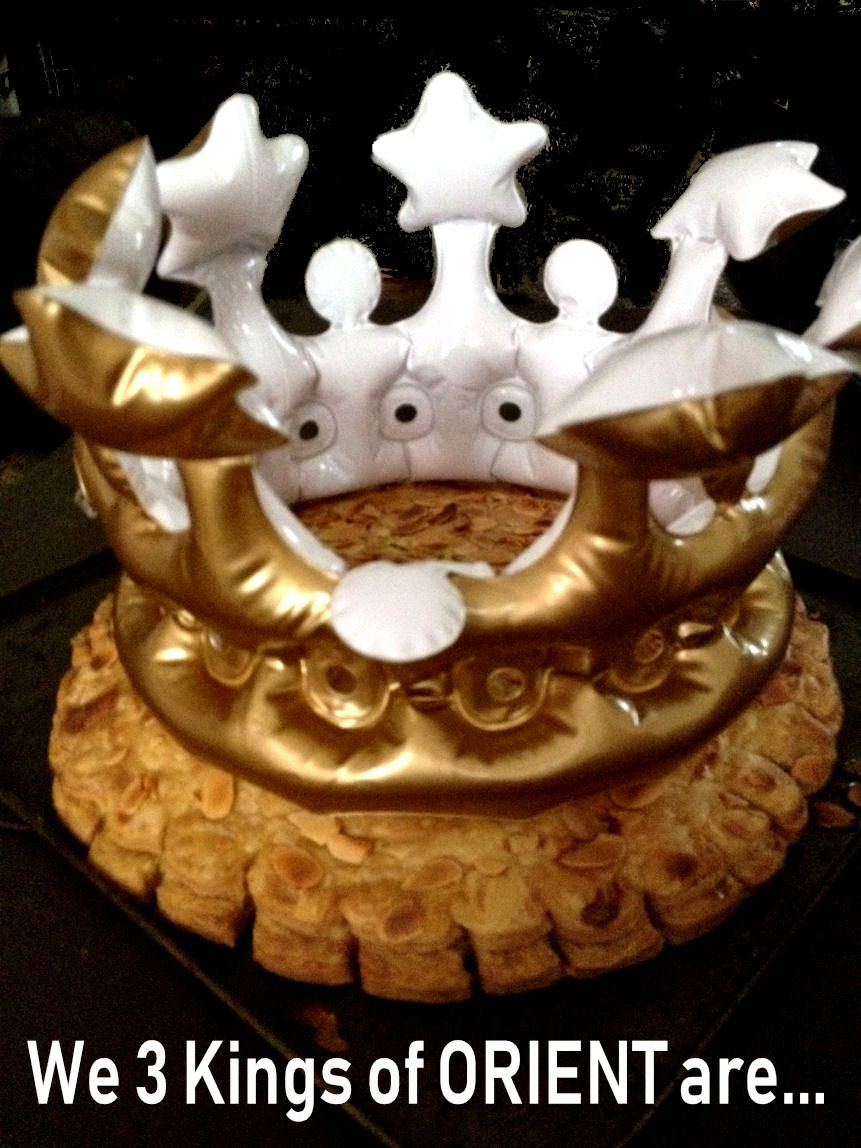 This weekend sees the Annual Epiphany Festival, celebrated mostly in Catholic home and nations from France to the North African Coast, This is a bake off to get stuck into..

When it comes to amazing “Divine” religious bake offs, France really did perfect the Epiphany Cake (Galette des Rois. The Galette is like the ultimate super size me stuffed butter cookie, much more satisfying moorish and superior to the fluffy “Christmas tree light” cakes of the south, Spain and Mediterranean (Roscon de Reyes).

The only down side is that the traditional Galette has been a graveyard for the fattiest animal by products, and, as such, out of reach for the Ethical.

Baking has moved on, we have dropped the unethical animal cruelty, and finally we can dispense with the last of satanic ingredients being “Palm Oil”.

Yes we Veganised it.

There is no excuse for Animal Abuse, Christianity, in it’s orthodox form, lends strongly to Vegan Ethics, the following links explore the relationship between the two:

There are quite a few mysteries and secrets around the Epiphany Cake and Celebration that have just been steam rolled over and stolen by zealous inquisition prone Catholics, and in doing so have lost all that was / is Divine about the cake.

When John Henry Hopkins Jr. penned the hymn “We three kings” in 1857, he picked up on more truth that he could have imagined, the key is in the lyric”we three kings of Orient are.

The Orient up until the late 1800’s was classed as the land as far west as Morocco and to the east, India, and to a lesser extent China. With a dumbing down of language and studies toward the end of the 19th Century, and the Geographical Americanization of the known world, the old Orient was displaced to the Levant as the primary subject of Orientalist research.

This decay continued to further hem the borders of the Orient to East Asia, Southeast Asia, and eastern Central Asia by the mid-20th century,  history books of our Modern Western scholars generally considered “the Orient” as just the the Middle East or the Far East.

The shifting of borders leads to a whole re-visualization of our 3 kings as no longer oriental and instead Arabic.

Roll back History and follow the trail of these oriental 3 kings and a whole new journey opens on he road to religious historical truth, one covered beautifully in the BBC Documentary “Jesus was a Buddhist Monk”.

Combine the findings of this documentary with Knight Lomas The Second Messiah along with The Unknown Life of Jesus Christ and you need up wanting to book tickets fro a trail to the final burial-place of Jesus Christ in Srinagar, Kashmir. (known to the locals as Rozabal, meaning the ‘Honoured Tomb’)

Questions while baking the Divine start to create questions upon questions. We hope that the content of this post and he Questions thereon will create in your thought a genuine “Epiphany” in the true meaning of the word:  “an intuitive grasp of reality,” “an illuminating discovery, realization, disclosure, or insight,” or simply “a revealing scene or moment.” in short an epiphany is “a moment of sudden or great revelation that usually changes you in some way.”

Anyway Away with 200 years of controversial truths, its time to get the baking done:

What do you need to create and “Epiphany” ? 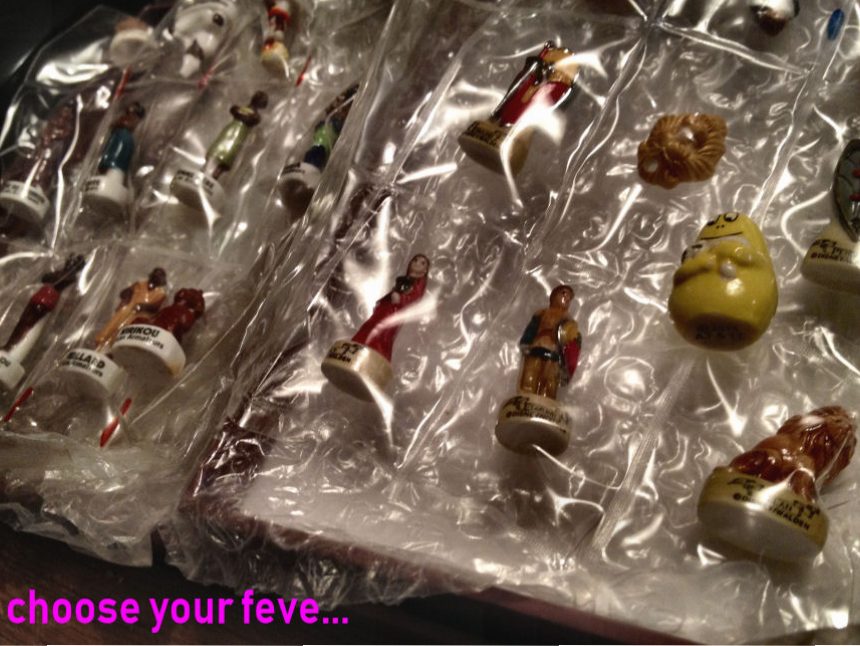 Whats all this about ?

Its a 2 step recipe – FIRST the insides….

125g of Vegan Palm oil free Butter – yep you can get it in Sainsbury’s https://www.livekindly.co/naturli-launches-vegan-palm-oil-free-spreadable-butter-sainsburys/

100g of Caster Sugar – its finer than the regular stuff, easier and cleaner to work with

1 tin of Aquafaba (you get that in a tin of chickpeas in water  – drain the water and put it in a blender until it looks like egg white (obviously its a replacement for eggs….)

Mix together the Vegan Butter and Sugar then  add the Aquafaba mix again then finally add the Flour and Almonds Mix and the extract and mix well. Place the mixture on a sheet of clingfilm wrapping the mixture in to disc / circle shape. Put it on a plate  and freeze for 30 minutes.

Its a 2 step recipe – SECOND the outsides….

Sift flour and salt in to bowl. Chop the butter into chunks and add to the bowl and rub in loosely still being able to see bits of the butter though in the mixture.

Make a well in the mixture in the mixing bowl and add in 2/3 of the cold water. Mix until you have a firm rough dough adding water if needed. Cover with a dry cling film and put it in the fridge for 20 minutes.

20 minutes later – Turn out the outsides onto a floured board and knead and roll gently into the form of a rectangle. It doesn’t have to be perfect but try to do some justice to divine geometry at least.

Roll in one direction only until 3 times the width of 20cm x 30cm. Keep the sides straight and even , don’t overwork leaving a marbled effect (the butter streaks through the layers NOT worked all the way through)

Fold the top third down to the centre then the bottom third up over that. Give the dough a quarter turn to left or right then roll to 3 times the length, fold as before  put back in cling film for another 20 minutes then its ready to roll out and cut as below 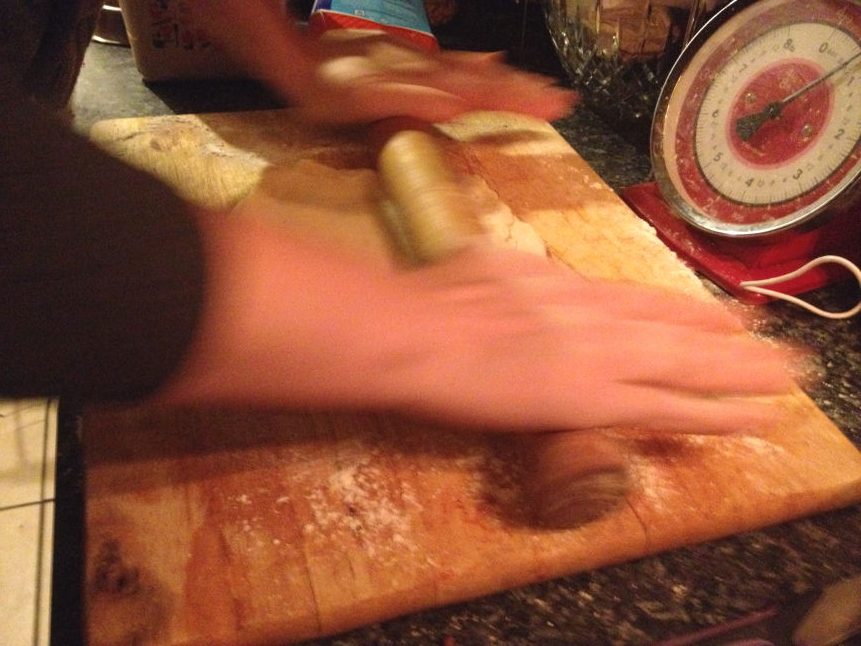 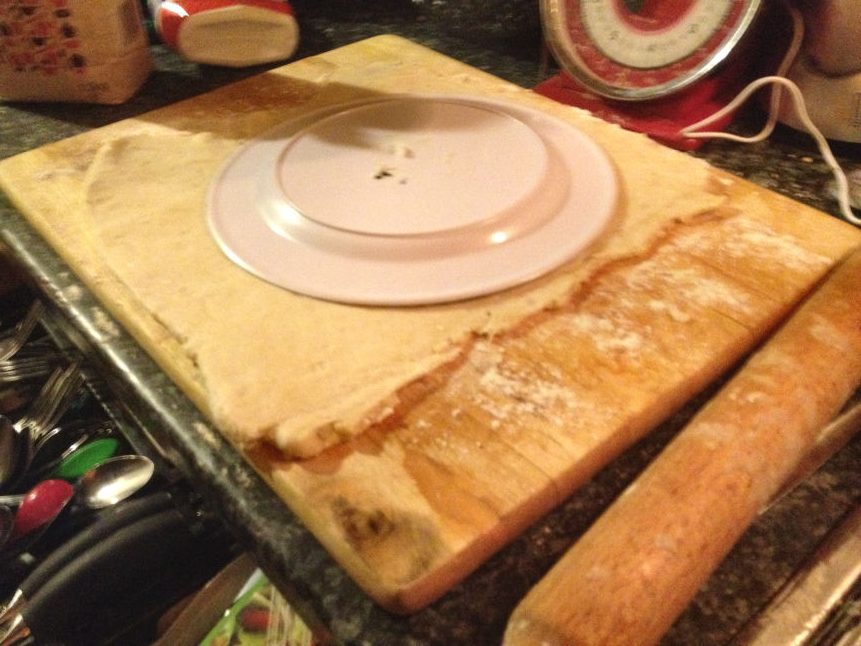 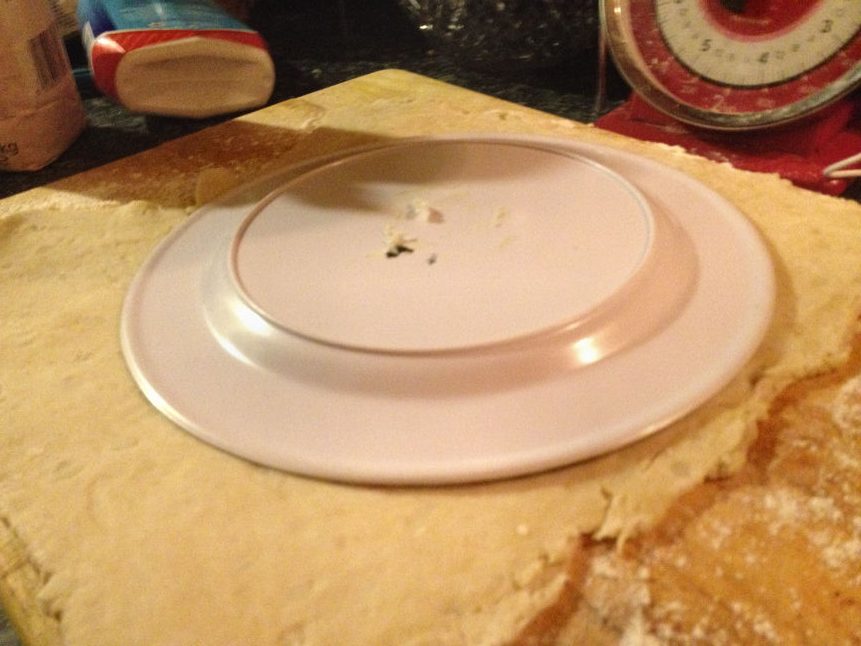 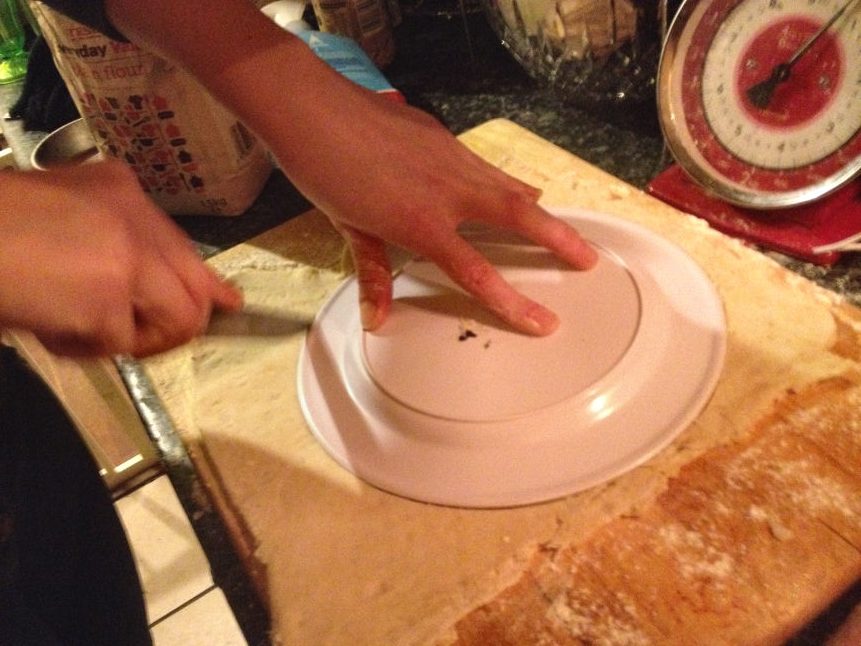 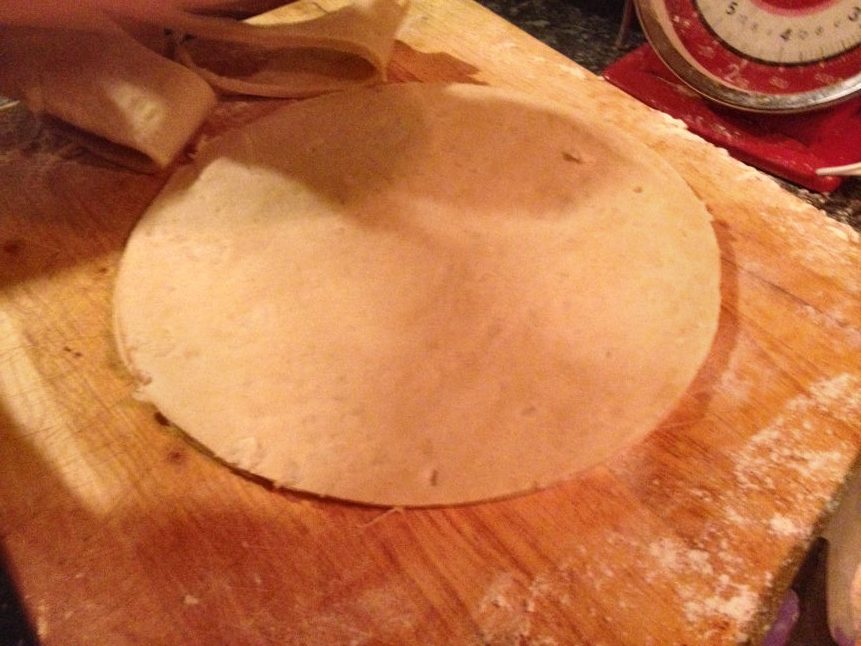 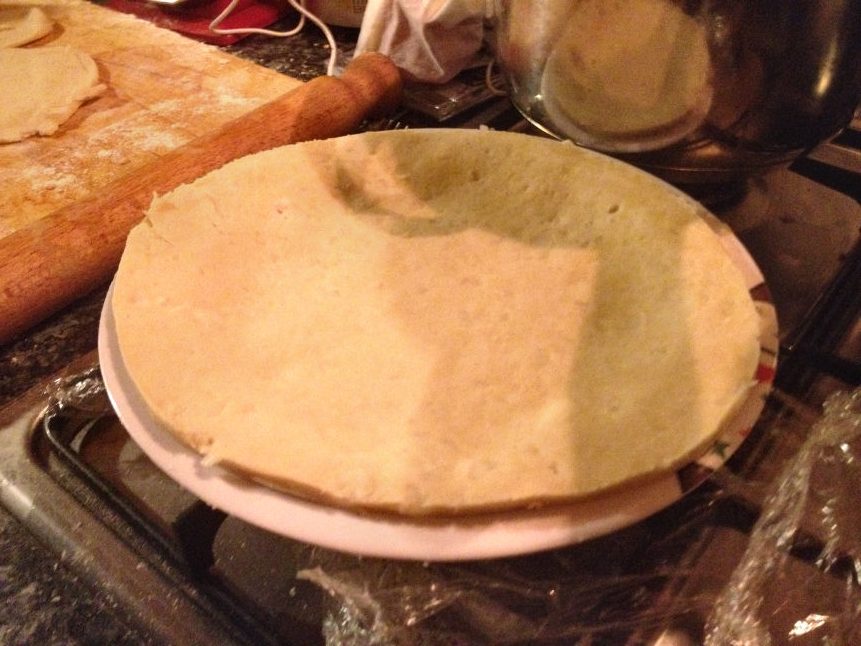 That’s two identical layers of outsides. Take out the insides from the freezer, push your feve into the frozen mixture and place between the outsides and press together the edges with your fingers then with a sharpe knife score a pattern on the top from the centre out in slow circular curve (like the start of a spiral) to the edge of the top edge with a design with a fork.

Decorate with Almond flakes and then it is ready for baking. 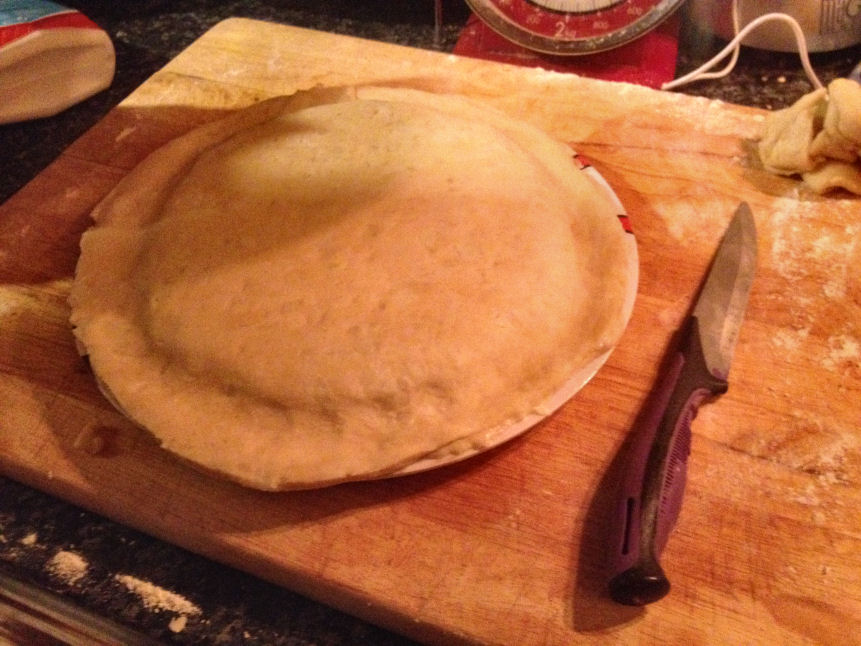 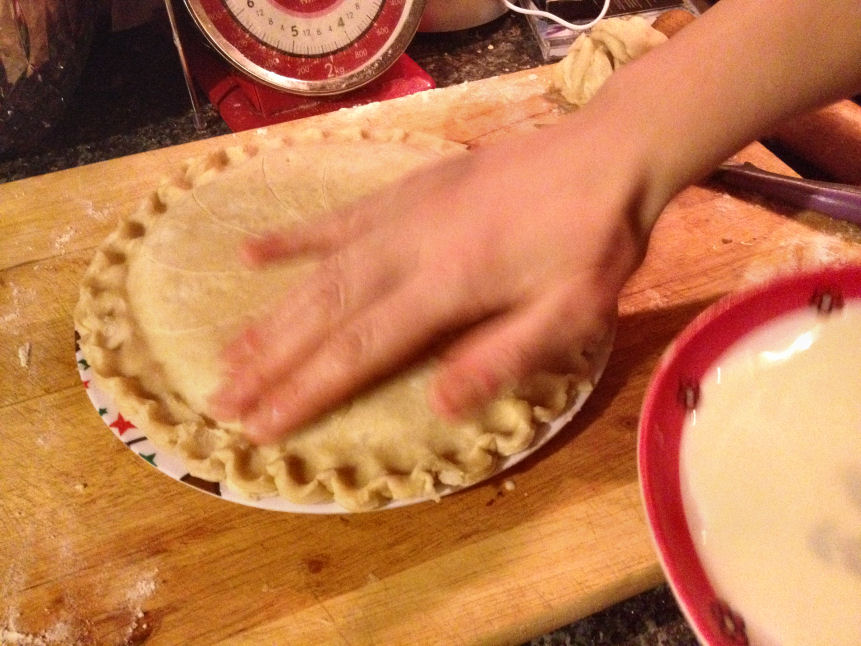 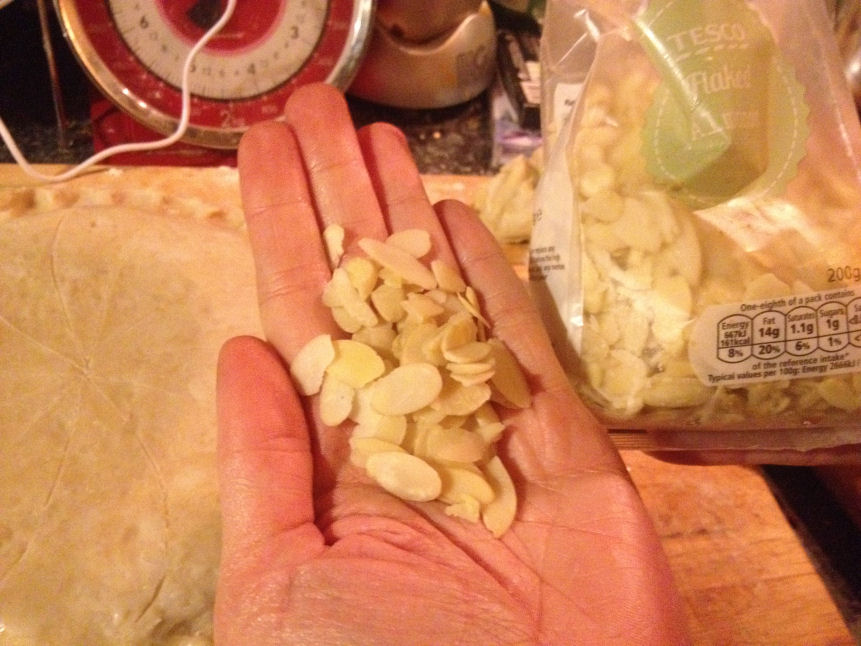 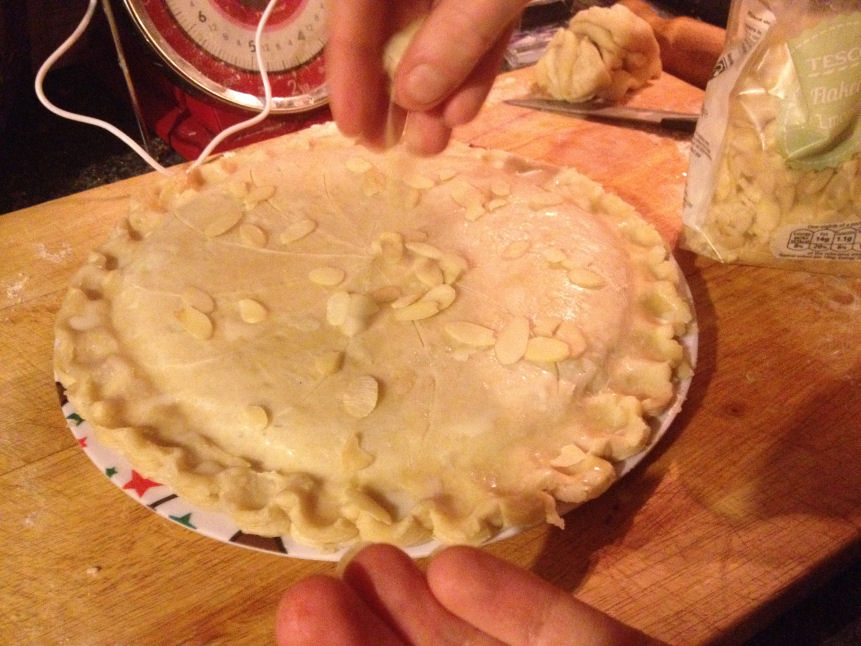 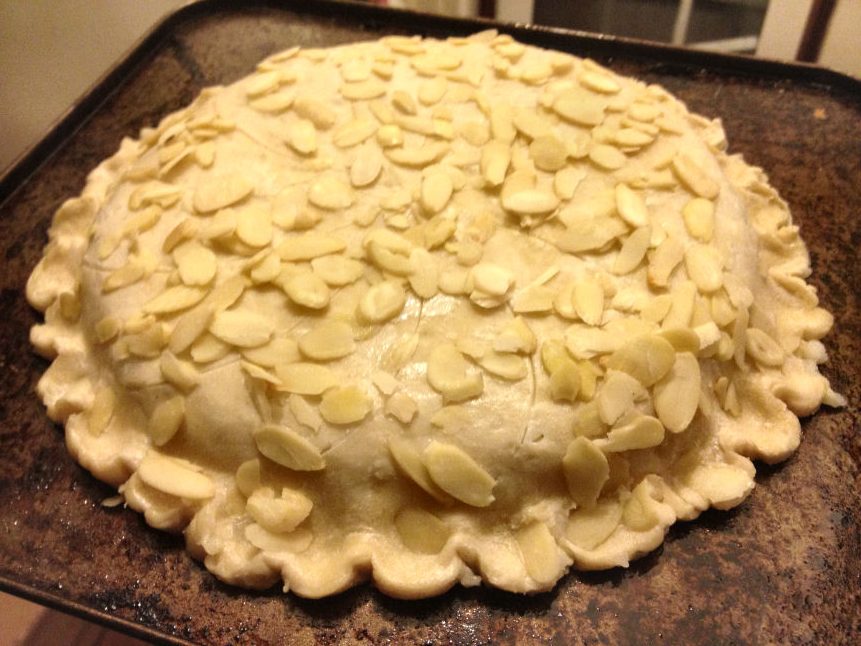 Preheat oven to 350 degrees for 20 -25 minutes minimum then check every 5 until done (some fan assisted ovens bake close to 25 minutes and non fan more like 45 minutes) remove from oven , leave to stand to cool for 45 minutes dress with the Kings Crown and serve. 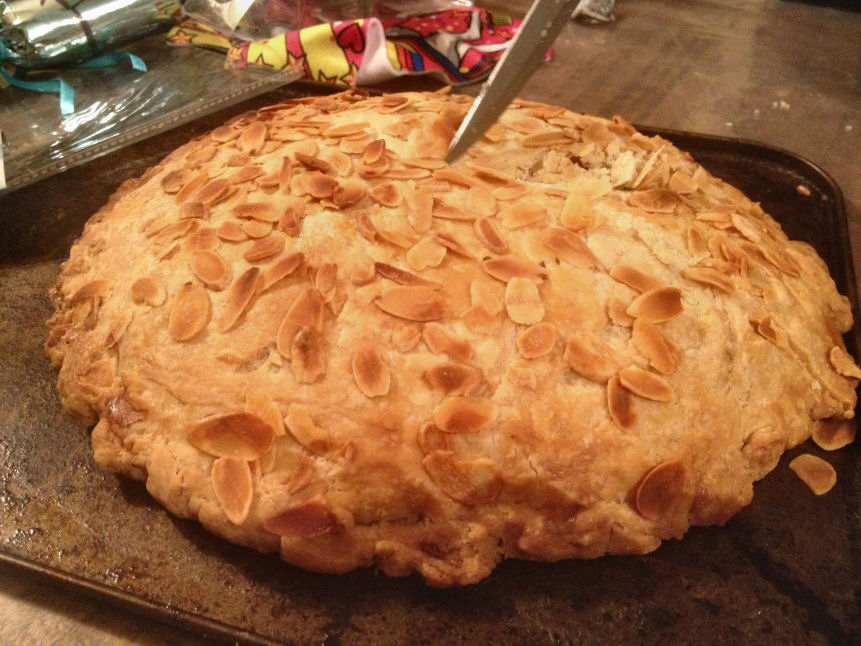 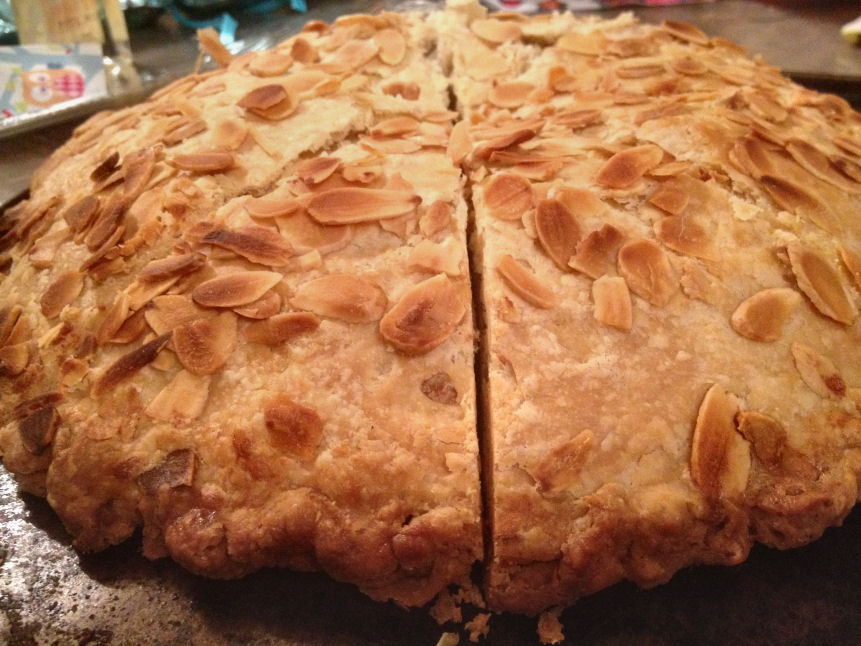 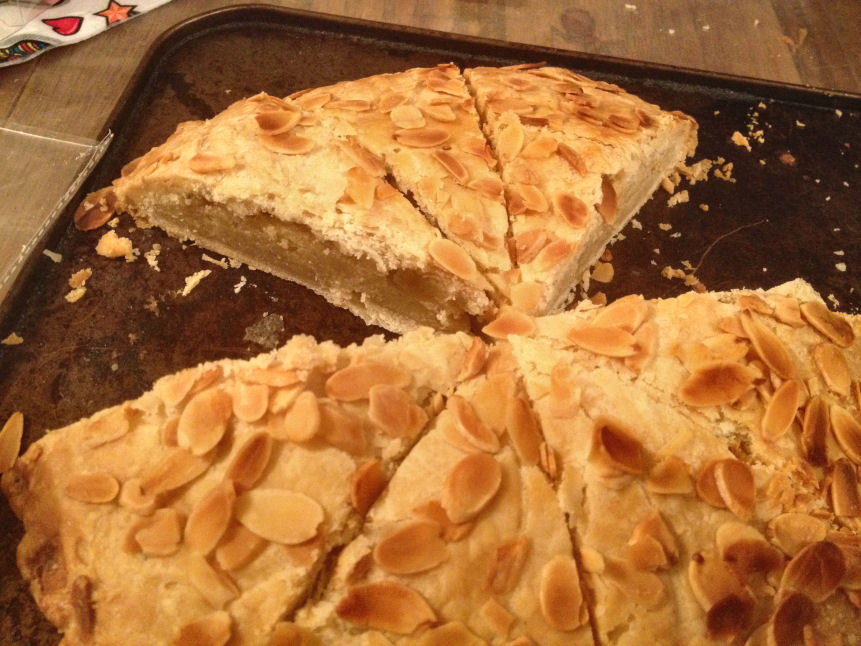 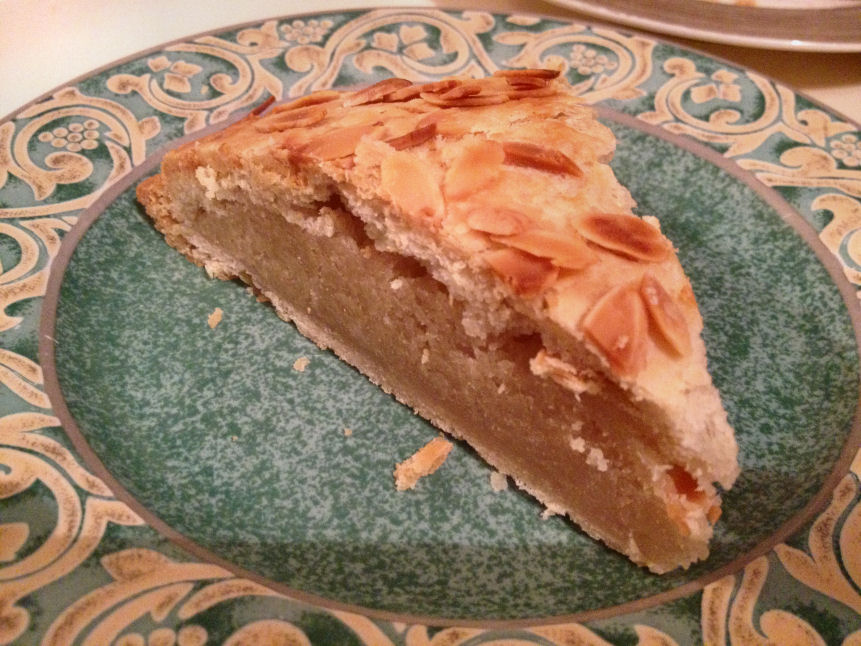 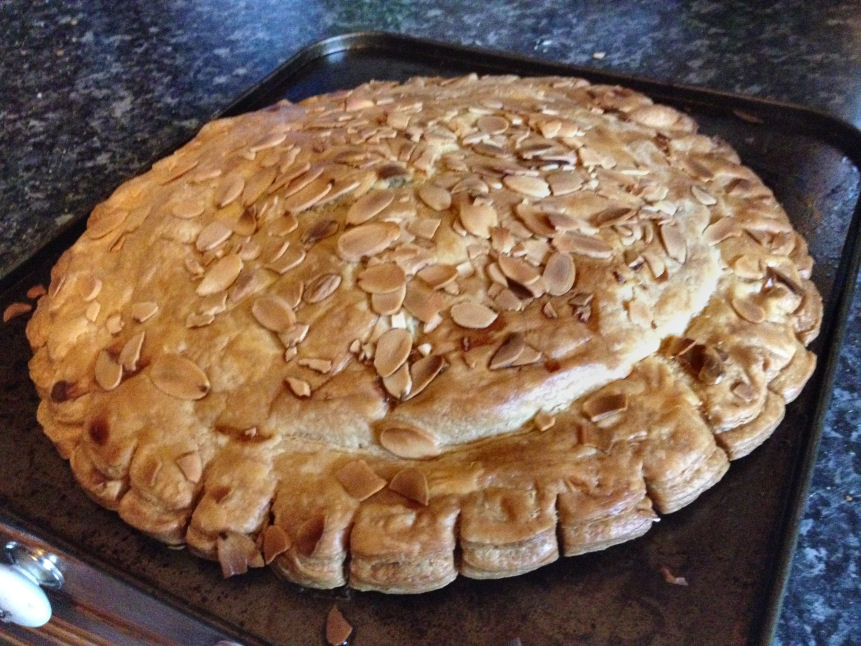 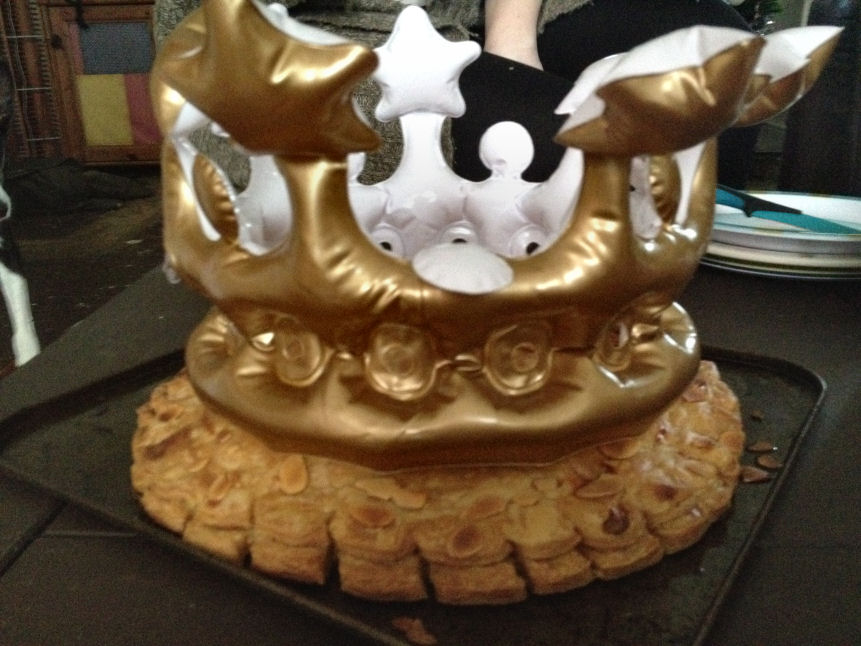 Though the tradition of becoming the Queen/King (based on who finds the feve and therefore takes the crown and commands) leans to Royalist or elitist social pyramid models (correctly lack of values rather than values as they are based on devaluation of the majority) of class division and servitude, this also opens the subject is open to discussion with family and leads to understanding the evolution of the “idea” of equality which fits snugly with how we live today. This is further supported by reproducing this classic “untouchable”recipe as a vegan cruelty free cake. The subject of equality is tied intrinsically to Species-ism, and can be captured in the language of modern political spin by the Corbynist slogan “for the many not the few”(The Many actually refers to ALL beings not just the human voting public).

Enjoy the history, Bring in meaning to the “game” and enjoy the cake.

Its cruelty free and it’s damn good. This Vegan Palm oil free Version  of this cake really delivers, there is no difference in process or output, apart from the ethics. no extra effort to source ingredients either.

its “truth and lies”,